As schools revamp their Title IX policies by August 14 to comply with the recently-enacted federal regulations, information about how those policies might look is starting to come to light. In recent weeks, a number of schools have made clear that—as my colleague predicted when the regulations came out—while they will create policies to address conduct that falls under the federal 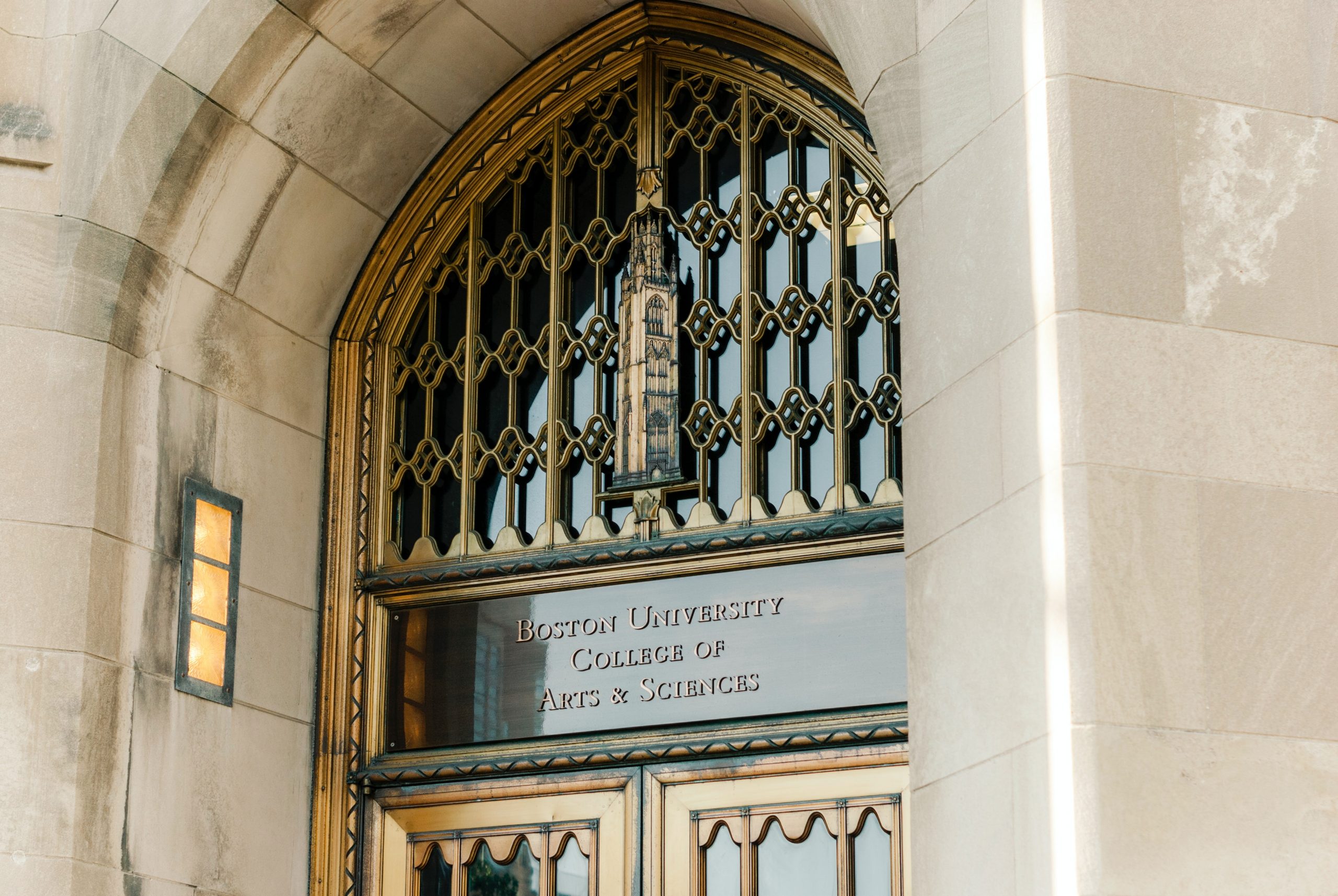 regulations, they will also have policies that address sexual misconduct issues that fall outside of what the federal government regulates. Boston University recently offered some insight as to how it will approach sexual misconduct cases come fall. According to BU’s Title IX coordinator, Kim Randall, “[c]omplaints that fall under the new Title IX regulations, as noted above, will be investigated using the procedures required by the new regulations, which are very different from our existing procedures. Those complaints that do not fall under Title IX will be investigated using procedures similar to those currently in place.” Having two separate policies that address sexual misconduct is likely to raise a host of issues that schools need to plan for before imposing those policies on students and faculty. Looking at how cases may be handled under BU’s proposed policies illustrates the issues schools will face if they choose to have two different sexual misconduct procedures.

How Will the School Determine Which Policy to Use?

The dual-track approach schools like BU plan to take is premised on the idea that it will be clear when allegations are made which policy would apply to the allegations. From my experience, almost nothing is ever clear in these campus sexual misconduct cases. As an example, the new federal regulations, and therefore any policy implementing them, apply only to conduct that occurs on campus. What happens if the complainant is not sure where an incident occurred? Some campus sexual misconduct cases involve one or both parties being “blacked out” from alcohol; often in those cases the complainant asserts that they know there was non-consensual sexual contact, but cannot remember any details about the situation. How will a school determine which policy applies in that circumstance?

As my colleague noted, the federal regulations dramatically narrow the definition of hostile environment “sexual harassment” under Title IX. Whereas federal employment discrimination laws, and our state anti-discrimination laws, define this type of sexual harassment as conduct that is sufficiently “severe or pervasive” to create a hostile environment, for categories of sexual misconduct that are not quid pro quo or do not meet the Clery definitions, the new Title IX regulations require a complainant to demonstrate that the conduct was “so severe, pervasive, and objectively offensive that it effectively denies a person equal access to the recipient[] [school’s] education program or activity.” And BU’s current policy defines sexual harassment as “unwelcome conduct of a sexual nature that has the effect of creating a hostile or stressful living, learning, or working environment . . .”

When there is a complaint of hostile environment sexual harassment, how will it be decided what policy is used to adjudicate that complaint? Does it matter if the complainant uses key words from the policies to describe their experience? What if the complainant alleges that the conduct was unwelcome and created a stressful learning environment—that allegation on its face does not seem to rise to the level of alleging a violation of Title IX’s definition, but will the school make these decisions based solely on the language used in the complaint? If the complaint is processed under the Title IX policy, and the decision maker determines that the conduct does not satisfy the quid pro quo or Clery standards did not rise to the level of “severe, pervasive, and objectively offensive,” is the case then started over under the other sexual misconduct policy for a determination if the conduct violated that policy? Do the parties have any opportunity to object at the outset to the process that is chosen if they disagree with the school’s assessment of how the complaint should be heard?

What About Cases that Implicate Both Policies from the Outset?

In many campus sexual misconduct cases, there are a range of allegations made by the parties against one another. Particularly where long-term relationships are involved, these allegations can span years, and include allegations of interactions that took place anywhere from campus dorms to vacations or study abroad programs in foreign countries. The allegations can also range in type and severity, from uncomfortable jokes, unwanted flirting and attention, to sexual assault and dating violence. Imagine a case where Taylor and Sam dated for a year and a half, and then broke up. Taylor brings a complaint against Sam, alleging that in the year and half the two were dating, Sam engaged in non-consensual sex acts with them in an on-campus dorm, at their parents’ house in a different state from the school, and while the two were on spring break in Mexico. Sam alleges that Taylor engaged in sexual harassment by using slurs and making derogatory comments about Sam’s sexuality while they were in Mexico, and by disclosing private sexual information about Sam to Sam’s roommates back on campus, which resulted in Sam being so uncomfortable in their dorm they had to move. How would a school like BU handle this case?

Schools that take BU’s approach would have to separate the allegations into those that allege violations of the Title IX policy, and those that allege violations of the Sexual Misconduct Policy, and initiate two investigation and adjudication processes. These two processes would look wildly different from one another. The following chart goes step by step through some of the differences in how the complaints between Sam and Taylor would be handled at BU as they proceeded along parallel tracks. Presumably the process would look similar at other schools. 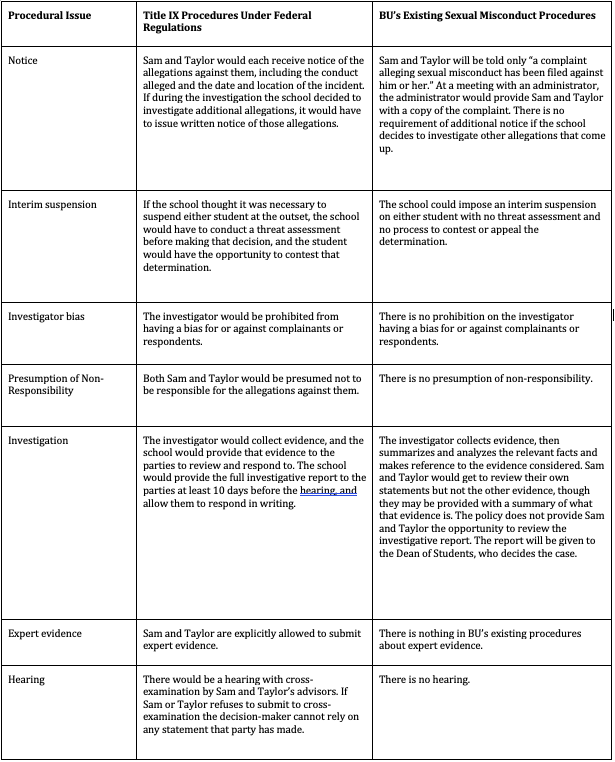 It is not hard to imagine that, given the vastly different procedures at play, the Dean of Students deciding the case under the sexual misconduct policy and the panel hearing Sam and Taylor’s Title IX case could come to different conclusions about the facts underlying the students’ claims. What happens then? What if the sexual misconduct process determines that on a certain date Sam and Taylor had sexual intercourse in Sam’s dorm room, but the Title IX process determines that never happened? What if the sexual misconduct process determines that the comments Taylor made about Sam’s sexuality actually took place on campus, not in Mexico, but that allegation was never investigated under the Title IX process? How will the school reconcile two wildly different processes considering the same complaints at the same time? Will the findings of one process be admissible in the other? Can the decision-maker be the same in both processes?

Where to Go from Here

The federal government has put schools in the terrible position of having to completely revamp their Title IX policies in three months, in the middle of a pandemic. Schools may be rightly concerned that if they simply conform their sexual misconduct policies to the new Title IX requirements, they will be forced to ignore many instances of sexual assault and sexual harassment that impact their students and faculty. Particularly when it comes to graduate students, faculty, and staff, who have rights under employment discrimination laws that may be broader than those under the new Title IX regulations, schools cannot simply ignore harassment that doesn’t meet the Title IX definition. Yet as illustrated above, having two separate processes to handle these complaints opens up a whole new can of worms that schools have never had to grapple with before. As someone who routinely represents students and faculty in these processes, I anticipate there will be significant confusion and problems as these policies are put into practice. Before schools release their new policies, they must think about how their new Title IX policies interact with existing policies, and work to ensure that sexual misconduct cases are handled in a fair, predictable, and consistent manner that does not require parties to repeatedly make and defend against allegations in different fora.

If you are involved in a sexual misconduct case at your school or university, contact our Title IX lawyers at (617) 742-6020.